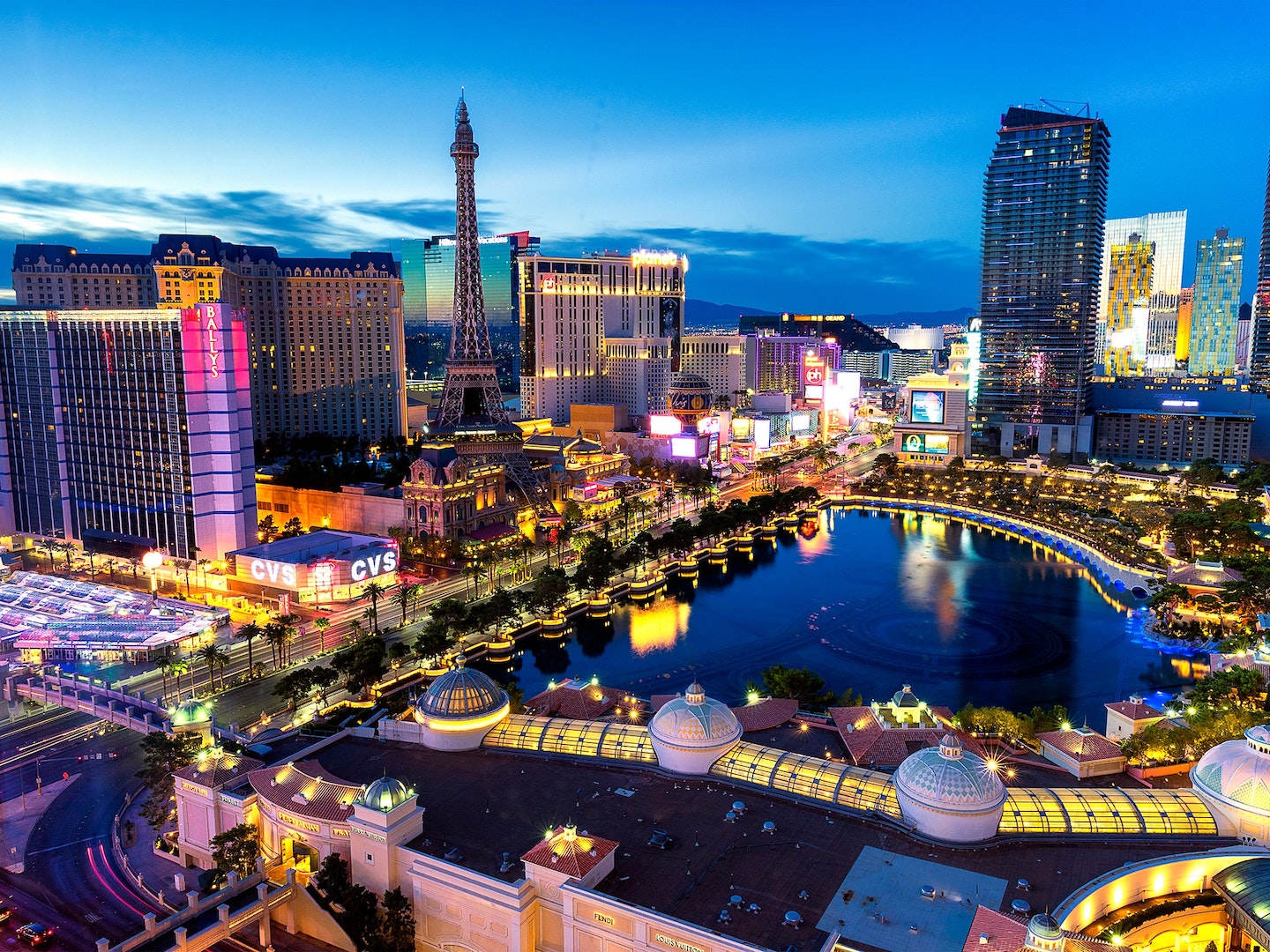 “Skyline?” you say, incredulity dripping off your question mark like condensation off a yardlong frozen daiquiri in 100+ degree heat. “Can you really call a castle and a volcano and the Eiffel Tower and some insanely powerful water-technics, and a pyramid, and a, and a, and a…a skyline??”

Absoloutely.  How do I know? Because 10 days ago, I returned home after a weekend jaunt, and for the first time in a recent spate of flights into and out of McCarran, my brain actually came online during landing. That\’s when I saw our beautiful skyline just like I used to see it before I moved to Vegas five years ago.  I saw it. I mean, I really, really SAW it. (Were I reading this aloud to you, I would have drawn out that last “saw” like two amorous teenagers ending a late-night phone call* – “No, you hang up.  No, youuuuu hang up. Okay, on three, we’ll both hang up: one, two, three…You didn’t hang up!! [Insert Pretty-Woman-gets-a-diamond-necklace giggle.]) I saw it like the tourists who’ve leaned over me umpteen million times upon touchdown as if I were the human equivalent of the flotation device used to buoy their curiosity about the Sin City they’d only previously seen online.

With my literal eyes open, my third eye seemed to open as well. It occurred to me that against all the odds, Vegas had done the undoable. It must have seemed like pure lunacy to anyone who heard our city’s casino founders describe their vision for a pleasure oasis in the middle of a desert and go on to say that they planned to birth that oasis by dropping one unrelated entertainment concept after another after another after another next to each other in a mish-mosh of spaces that would magically deliver one of the most incredible visual experiences Earthlings have ever known. To put it mildly, Vegas pulled the ultimate Combiner.

The Combiner, in the world of the Transformers, is the combination of two or more totally distinct and wildly different entities into one incredible super bot capable of feats that none of the individual bots could\’ve achieved on its own.  Think I’m making it up? That’d be a real hard no, friends. Turns out there’s a whole Transformers Wiki post about Combiners. Double turns out…there’s actually a whole Transformers Wiki too. Both Decepticons and Autobots pull Combiners, and just like the city of Las Vegas, they eschew preconceived notions about what “should” go together. Instead, opting to do what feels right above all else and trusting that their unique super skills, when mashed up, will ultimately yield something wholly new and super-duper rad.

Say what you will about Las Vegas, but for some reason, jamming a castle next to a pyramid down the street from ancient Rome and then filling each of those places with everything from Michelin starred restaurants and iconic fashion house flagships to 99¢ margaritas and Sex in the City slot machines (the instructions for which are delivered via the silky smooth voiceover stylings of none other than Mr. Big actor himself, Christopher Noth) just freakishly works***. What does this have to do with space design, you may wonder? Well, shortly after I had that aeronautical epiphany, I thought about what it could mean to the couple I’m currently brainstorming with about the redesign of their beautiful Summerlin abode. (For those unfamiliar, Summerlin is a lovely master-planned community in the western Las Vegas valley.)

I say to clients often (as I said to these folks), “Tell me what you want, what sings to your heart, even if it makes zero sense and seems too wacky to ever bear beautiful, cohesive space design fruit.”

I say that, and they hear it for all of about a half a second.  During that half a second, I see the twinkle in their eyes as their gorgeous inner-selves delight as the Optimus Prime x Sinatra-esque mid-century themed entertainer’s kitchen they’ve always dreamed about blinks momentarily into existence.

Promptly though, their HGTV-trained social-selves slam the door on those happy little inner-self dreams. They\’re reminded that there are simply NO Pinterest boards themed after an altruistic robot who loves to host parties against the backdrop of flat front cabinets and hexagonal teal backsplash tiles.  Guess what? The only reason those Pinterest boards don’t exist is because we don’t allow ourselves to believe they can. We don\’t remind ourselves that both Optimus Prime and mid-century design were at one time only the farfetched dreams of their creators who had to decide to allow those dreams to come alive no matter how unconventional they may have seemed to everyone else. Of course, this just my opinion, but it tracks wouldn\’t you say?

Returning to our “what would a conversation in old-timey Vegas about the future amalgam of hotel concepts have sounded like to anyone besides the people who ultimately built all our over-the-top amazing city’s gaming edifices” musing from the beginning of this post (go ahead, reread for context if needed; it’s okay, I’ll wait). Here’s how I think an exchange between Ben Jaffe, developer of the Tropicana Hotel + executive at the Fountainbleu Miami Beach and anyone else would have gone down circa 1955 when he bought the plot of land where the famed hotel now resides:

BEN JAFFE:
So I’ve been thinking and we’re going to create a mini-Cuba in the desert and name it “The Tropicana.” Probably, it’ll become known as “The Trop” for short.  There’s nothing there now but piles of dirt in every direction for miles, but I’m confident that thirty to forty-five years down the road, once others augment our tropical oasis with a medieval castle, the Brooklyn Bridge, and an emerald green monolith at the entrance to which sits an enormous golden lion, this little slice of island paradise will find itself on one of the most iconic intersections on Earth and the one that boasts the most hotel rooms of any intersection in the known universe.

LITERALLY ANYONE ELSE IN EARSHOT OF BEN JAFFE
Ummmm, first that\’s an oddly specific prediction. Second, do you need water or something?  Maybe sit down and breathe for a second?  I think you might be having a hysterical attack.

BEN JAFFE
I\’m good thanks.  I\’ve gotta get busy building this casino and the future of gaming, hospitality, and entertainment as the human race knows it, so, catch ya later?

And here we sit 65 years later, with a more than four-mile-long stretch of wildly varied hotel and casino designs that have pulled the ultimate Combiner, attracting more than 40 million visitors from around the globe each year.

Okay, maybe you’re not looking to welcome 40 million people into your living room in 2020, but the point is to let yourself live a little.

Give that inner-self of yours a chance to stick her head up without fear that she’ll be promptly whack-a-moled back down into submission by your social self screaming, “BUT YOU HAVE TO HAVE A WALL FULL OF SUCCULENTS, STACY.  2020 IS ALL. ABOUT. SUCCULENTS. IT’S ALLLLLL ABOUT SUCCULENTS!!!”

FORGET succulents.  (Or don’t if you love them.)

I’m simply suggesting you allow your inner-self to do its happy design cartwheels right alongside the happy design cartwheels of anyone else’s inner-self who may also be invested in creating the greatest space experience possible at your personal version of the intersection of Tropicana and Las Vegas Boulevard. Like Vegas or the Transformers, designing a space experience should really only be one thing: extremely, over-the-top, have-a-damn-blast-any-way-that-works-for-you fun.

So, to everyone and anyone designing or redesigning the space experience of their dreams, I say, “This is our home, Megatron! We will stay! We will fight! And we WILL win!”

Oh no wait, that’s Optimus Prime doing his thing in 2011’s Transformer’s: Dark of the Moon. What I say is …

Define the dream. Design the dream…And let yourself have a little fun While doing both.

Because if you can’t have fun designing a space experience in your own home, then maybe it really should be Megatron’s after all.

*To 2020 teenagers, a phone call is a thing us thirty plus somethings used to do because cell phone only existed in old episodes of Star Trek.**
**Star Trek was an overtly yet delightfully over-sexed sci-fi show where people would beam around space fighting fake monsters and then bedding them.  It was confusing, but really, what wasn’t in the 60s when the show originally aired?
***Yes, I love and have played the SITC slot machine.  Hilariously, so has theSlotLady whose October 2017, real-time, 28-minute video of live slot play has racked up over 108k views on YouTube!!